Here’s a look at four speakers from GMASA’s brilliant line-up.

Tina Pang is the Head of Twitter’s Online Sales in South East Asia. Having joined Twitter in 2015, Tina drives existing and new business development through partnerships, business development, account leadership and agency relationship to positively drive revenue growth. She is a dedicated planner whose career has been built on her strong sales and marketing experience across multiple verticals, including e-commerce, finance and FMCG brands. Tina was previously part of Yahoo’s Asian Pacific and SEA division, and has also worked in marketing positions at CNET Asia and OgilvyOne.

David Yin is a Business Development Manager at Google Play Apps & Games, South East Asia & Australia. He is responsible for acquiring, driving and building a pipeline of Android apps and games in SEA and Australia. Before Google, David worked as the General Manager at Vserv, where his primary role was to develop partnerships focussed on mobile app monetisation. He also worked at Global Developer Alliances and Nokia. His career spans over 15 years, and has included positions at Vodafone, Orange, and SingTel Optus. David holds an MBA from the Australian School of Business and is an Australian Chartered Accountant.

Dippak Khurana is the co-founder and CEO of VMAX™, one of the leading app monetisation platforms in India and South East Asia. Dippak’s career spans over 20 years, and he has spearheaded the internet and mobile revolution in India. Following a successful stint in the desktop internet industry, Dippak’s foray into the mobile industry began in 2001, when he launched multiple market first initiatives for Yahoo! India and pioneered mobile Internet portals for telecom operators. In 2010, Dippak co-founded Vserv, a mobile marketing and commerce platform. Dippak’s career and contributions have been acknowledged through multiple accolades including being named among Business Insider’s ‘Most important people in Mobile Advertising’ and India’s Digital Power 100 list.

Danny Wirianto is the Chief Marketing Officer (CMO) at GDP Venture, a holding enterprise that comprises over 20 companies focussed on community, commerce, advertising and entertainment. Danny is also a serial entrepreneur who has founded multiple ventures such as Mindtalk.com, SemutApi Colony, MerahPutih Inc., Bolalob.com, Kincir.com and MediaXasia. Owing to his profesional mettle, Danny has been recognised and felicitated with multiple awards including CMO of the Year, and has been named among Top 10 Best Mentors in Asia and the Top 100 Young Influencers in Indonesia, to name a few.

Come 26th January, Tina, David, Dippak and Danny will take the stage to share their insignts and experience. We are excited to hear from them, and we know you will be, too! So, register now to be a part of this exclusive event! We look forward to seeing you there! 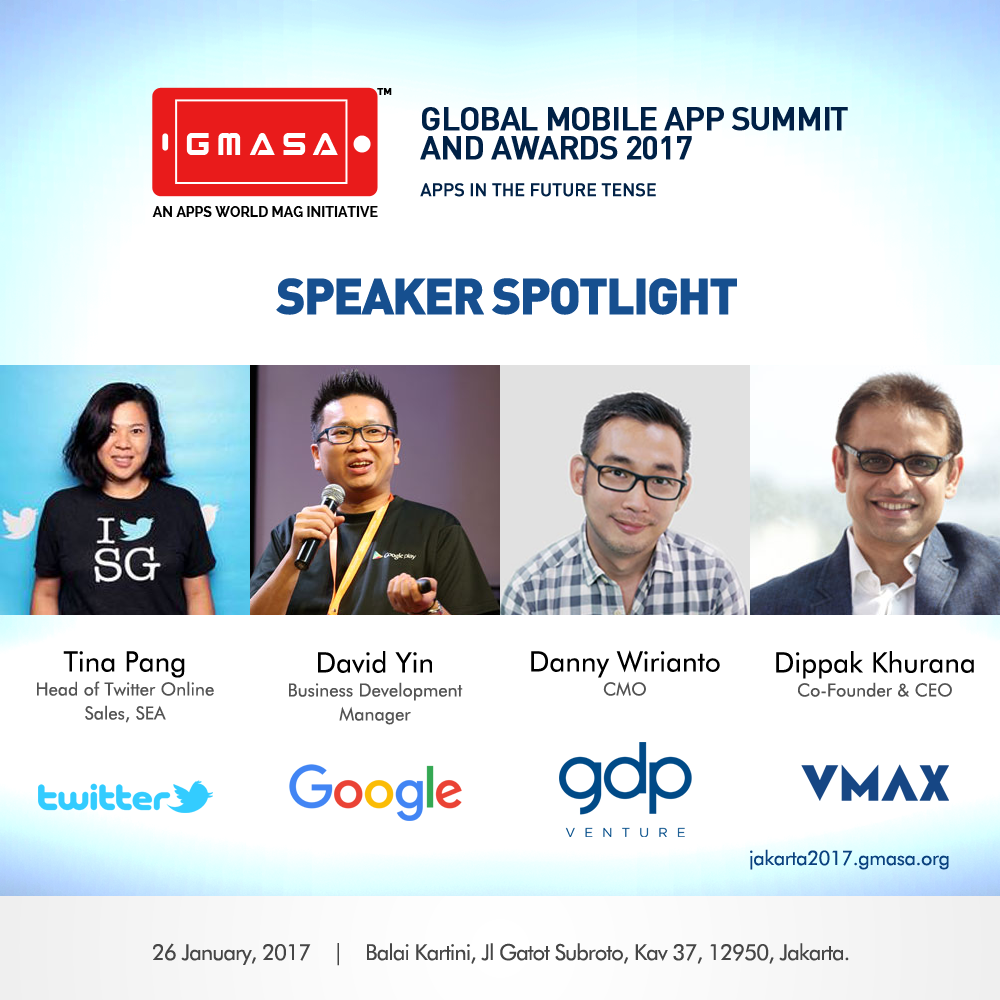